The Law of Time

Everything that happens in the Universe can be characterized as an oscillation process both on the microcosm and macrocosm levels: the orbital revolution of electrons around a nucleus, the revolution of the Moon around the Earth and the Earth and the planets around the Sun, the galactic rotation. Similarly everything in a human life is subject to a certain pulse, tempo or pace of living and can be described as an oscillation process.

Time is a correlation of frequencies of the oscillation processes one of which is taken for a reference pattern.

Since too many things in a human life are subject to the solar pulse, the period of revolution of the Earth around the Sun – a year, and the rotation period of the Earth – a day – were taken for a reference time.

If we consider a human life as an oscillation process we could see the following: before the age of 25 a human being studies and does not take an active part in a social life; the age between 25 and 50 years is the period of the highest productivity in social activities of a human being; after the age of 50 most of people start to immerse themselves into their own problems and try to stay away from an active social life. Therefore, the most significant in terms of social activity period of a human life is the period about 25 years long.

Similar principle can be found given the average age of a woman when she becomes a mother for the first time which is also about 25 years. Since during the conceiving process a genetic information exchange is taking place and a newborn baby already possesses a new genetic code, this means that the information exchange on the biological level takes place every 25 years.

Let’s name this process as “the frequency of biological time”, throughout the global historical process it actually has not changed and remains constant.

A human being is the only biologic species on earth which processes everything that he gets from nature and creates something new. Thus, beside the existing biosphere a human being has created a technosphere, which he is continuously modifying and improving. The rate of the technosphere modification has been significantly gingered up by a legalized usurious interest, which is constantly stimulating the implementation of new technologies to pay off the debts. Is there any periodicity in the technosphere modification? Yes, there is such a periodicity and it can be traced easily, if we take as a basis one of the fields of the human activity, e.g. transport.

A human being invented a dray-cart and it has served without any significant modifications for thousands years. A human being invented a carriage and it has driven for hundreds years. A steam locomotive was invented and its design has been modified in decades: from steam and diesel locomotives to electric locomotives and a monorail railway. After the invention of an automobile and an airplane the modification went on by single years.

The correlation of the biological time and the social time frequencies and their interrelation in the global historical process was named “the Law of Time”.

Let’s see how these frequencies are correlated. 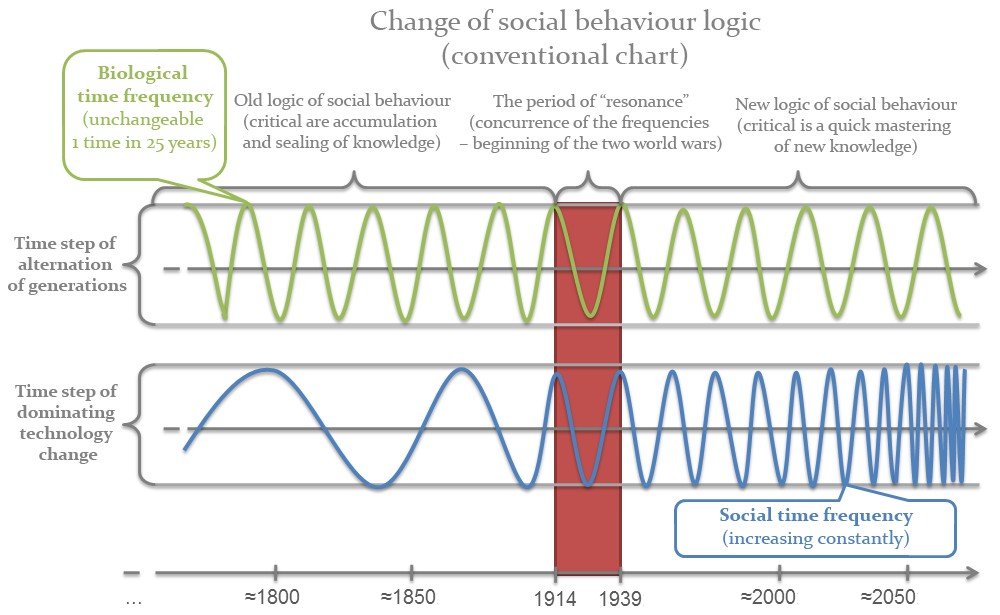 In the first half of the 20th century, when the biological time and social time frequencies concurred, an event took place in the mankind life, which is called “a resonance” in engineering.

Any system, even the one being in quiescence, has its own oscillation frequency. If a disturbing force having the frequency close or equal to the oscillation frequency of the system is applied to it, this will result in a resonance generation, in other words: a dramatic increase in the oscillation range. The resonance events may cause irreversible destructions in various mechanical systems, e.g. an incorrectly designed bridge. Thus, the EgyptianBridge crashed down in St. Petersburg in 1905 while a cavalry squadron was moving along it. And the TacomaNarrowsBridge collapsed in the USA in 1940.

The mankind managed to pass through this period of time and survive, because this period was insignificant in terms of its duration relative to the whole historical process, and the population of our planet had not reached the critical mass by that time, though the world had been shaken by a number of wars and revolutions. This period is named “the Revelation” or “Apocalypse” in the Bible.

Currently numerous changes take place in the world around (i.e. the changes in the information status of the society) during the life period of an individual human being and the life of a generation. The attitude of people to what is going on around them also changes; therefore, the logic of social behaviour of people has changed after the second half of the 20th century.

In the period preceding the change of the social behaviour logic a human being came into the world, received some information such as: here is God, here is Tsar, here is Church, and that information had remained unshakable until the moment the human being left the world. The one who was initiated into some secret or sacred knowledge at the beginning of life could prosper until the end of his life due to the monopoly for this knowledge. The one who did not get such initiation had to work hard, e.g. digging the ground. Now the time of initiations is over, they have lost any sense as a result of the increasing social time frequency.

The rate of the technological development can be illustrated by the information provided by Cisco Chief Futurist Dave Evans at the end of 2009:

The main principle of the mankind enslavement is based on the use of the monopoly for knowledge. A small group of parasites sitting on top of the social pyramid possesses comprehensive and complete knowledge belonging to the whole mankind, and the closer the base of the pyramid is the less knowledge is provided to people. Basically, two symbolic pyramids may be considered: one is the pyramid of power with its tip pointing up, and the other is the pyramid of knowledge with the tip pointing down. The Law of Time ruins the system of pyramids. A contemporary slaveholder, a master of working men, has to provide his slaves with new knowledge continuously to make them work better and produce a profit under the social time speeding up. But if the slaves get more and more knowledge, they will not be slaves any more. 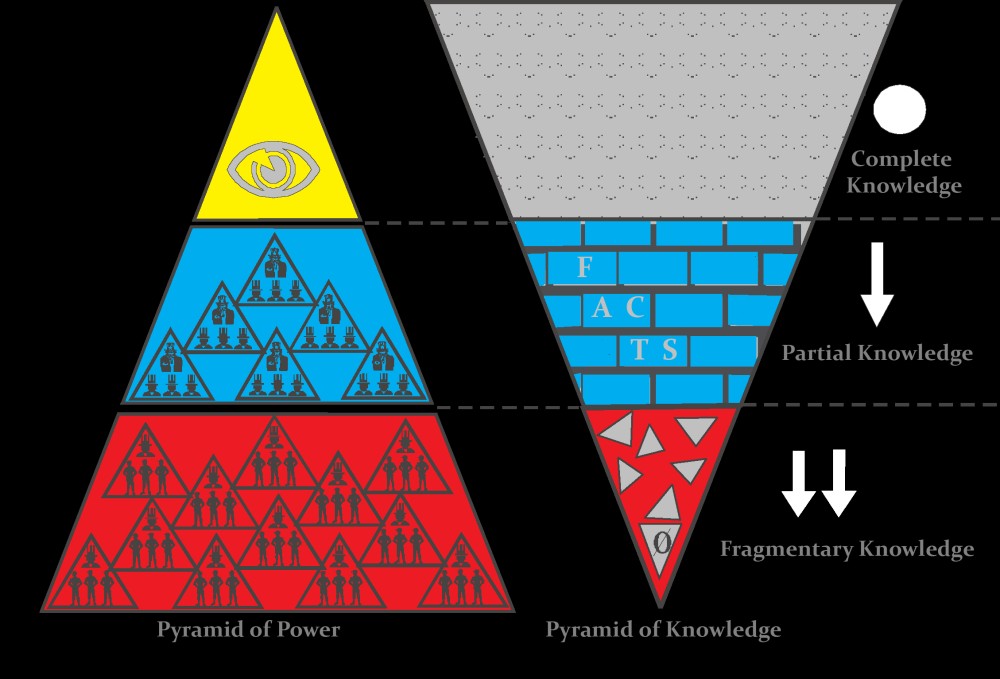 His own comprehension of the Law of Time and the helplessness of the present day slaveholders in relation to it Alexander S. Pushkin expressed in his great poem “Ruslan and Ludmila” with the following words:

From sky the stars he'll pluck, I'll wager,
Or shift the moon that sails on high,
But change the law of time and aging
He cannot, hard as he may try. 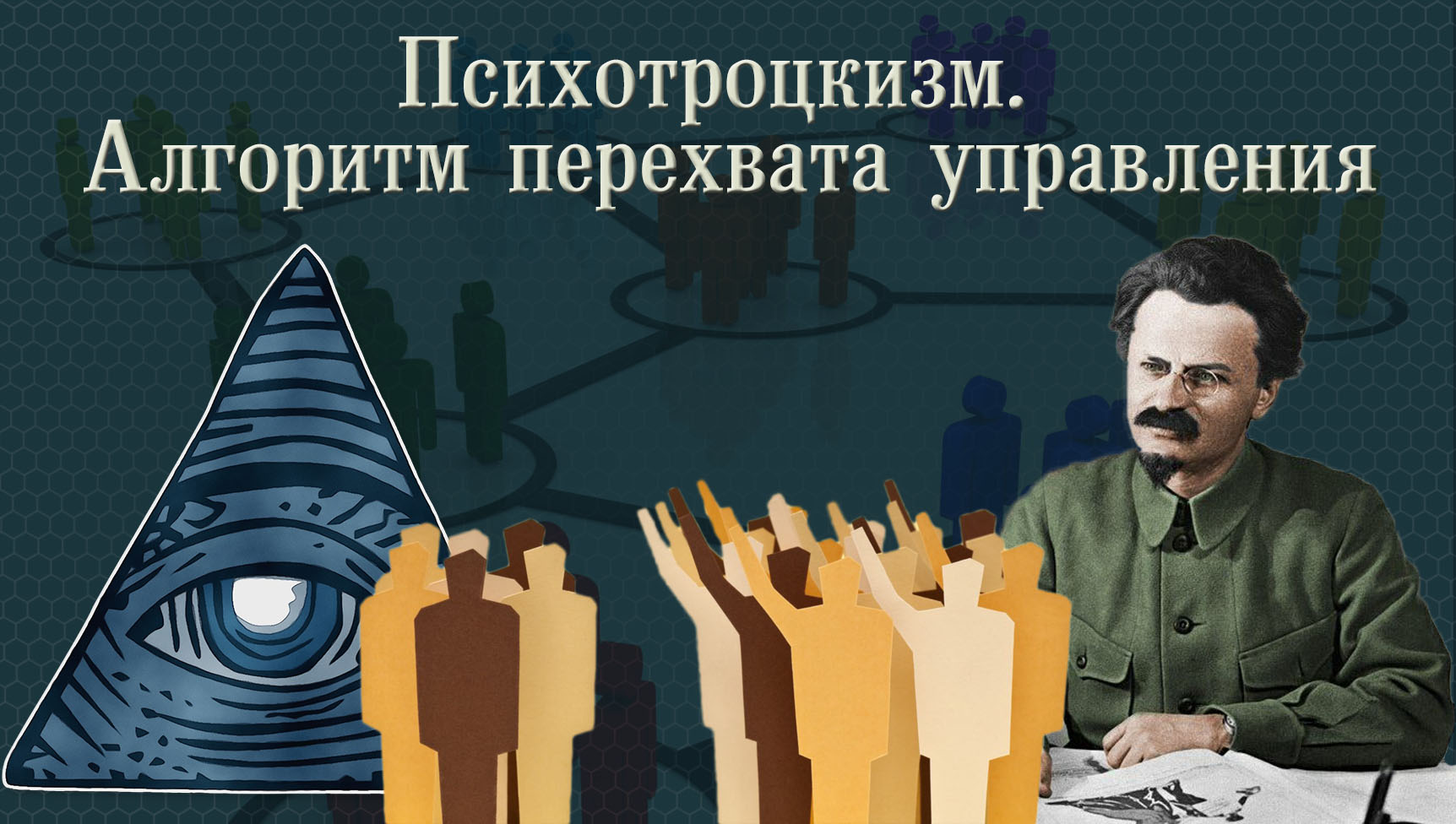